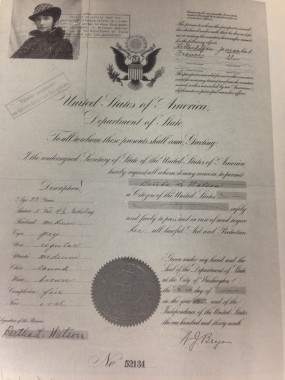 Sanger’s 1915 passport under the pseudonym “Bertha L. Watson.” It was much easier then to get a false passport!

Bertha Watson, you ask? But this blog is about Margaret Sanger! Yes, of course it is – but if you were fleeing an indictment trial for attempting to mail copies of The Woman Rebel, deemed “obscene” literature, wouldn’t you sail under an alias, too?

Sanger’s diary for November 3, 1914, is written on Canadian Pacific Railway Ocean Services stationery, with room to fill in the name of the ship on which she was sailing — the R.M.S. Virginian, in this case. The entry is also headed “Sailing to England as Bertha Watson.” There are entries for the first, second, and fourth days at sea, before the diary resumes on November 13 from Liverpool.

The R.M.S. Virginian, run by the Allan Line, sailed from Liverpool to Quebec. She and her sister ship, the R.M.S. Victorian, were built at the Belfast shipyard of Workman, Clark, & Co. in 1904, and were the first two passenger liners crossing the Atlantic to be powered by steam turbines. Her maiden voyage from Liverpool to St. John, New Brunswick, began on April 6, 1905. On subsequent voyages, she ran the Liverpool to Quebec line for which she had been built.

“Sailing to England as Bertha Watson” — The first page of Sanger’s shipboard diary.

The ship had quite a few adventures outside the normal trans-Atlantic duty. On April 14, 1912, the New York Times reported that a wireless dispatch received by Allan Line officials in New York indicated that the Titanic had struck an iceberg and the Virginian had responded to these distress calls. The Virginian had sailed on Saturday, April 13, from Halifax, so she was too far from the Titanic to get there quickly enough to be of use and thus resumed her normal route upon hearing that the Carpathia was closer and would go to the aid of the Titanic.

In late May, 1914, another shipping disaster affected the Virginian. On the fog-shrouded St. Lawrence River, the Canadian Pacific steamship Empress of Ireland, making a voyage from Quebec to Montreal, was struck on the starboard side by the Norwegian collier Storstad; the Empress of Ireland sank only fourteen minutes after the collision, taking with it 1,012 of the 1,477 passengers and crew. This left the Canadian Pacific ocean services one ship short; the Virginian filled in. This explains the heading on Sanger’s stationery.

Not long after Sanger’s voyage, the ship was taken by the British government for troop transport during World War I; following the war, she was sold to the Swedish American Line, where she was rechristened Drottningholm and began sailing in May 1920 from Göteborg to New York. During World War II, some of the Swedish American Line ships, including Drottningholm, were used by the Red Cross for the exchange of diplomats, civilians, and wounded prisoners of war. Following the war, the ship was again sold, this time to the Home Lines; again rechristened, this time as the Brasil; and again began sailing a new route, this time from Genoa to Rio de Janeiro. In the 1950s, although still owned by the Home Lines, Brasil was managed by the Hamburg-Amerika line, rechristened Homeland, and sailed first the Hamburg-Southampton-Halifax-New York route and then the Genoa-Naples-Barcelona-New York route. In 1955, she was retired and sent to the shipbreakers at Trieste to be scrapped after 50 years of service, a long and full life indeed.

Sanger did not mention the conditions on the ship, which were reportedly very nice, in her diary; instead, she tells a few anecdotes about some of her fellow passengers and reflects on the swirl of events that has brought her to this ship under an assumed name. She did comment on the

cargo cargo – food taken from the producers to supply the fighters.

Among the passengers that Sanger found interesting enough to comment on were:

A certain type of English woman…buoyant, frank, fearless – yet considerate. Her face is fair & lovely – abundant hair coiled at the back of her head. The slight framed, peked faced, youth who startles one by saying he is a cattle dealer – his talk is much of profits & the way of profit makers. He has one good idea – that he will not go to war. Lives in Chester parents keep the Albion Hotel there – five sisters – fifty-eight times across – buys cattle from Argentine.

a nice chap on board – (capitalist) – been all over – so different from the provincial Englishmen – we talked of labor & its problems – he has a view of philanthropy.

On November 13, the Virginian docked in Liverpool and Sanger

arrived at the Adelphia Hotel 11am. No trouble at Customs as I had only one bag.

Perhaps it’s slightly more difficult to plot the R.M.S. Virginian on our map than the usual Sanger Slept Here post, but the voyage came at a crucial point for Sanger. She was fleeing indictment and attempting to keep up as much of her work as she could while away. On a more personal note, her journals for her time in England in 1914 record how desperately she missed her children as well as the breakup of her marriage to William Sanger. The R.M.S. Virginian’s eventful life was nothing compared to Margaret Sanger’s.

For more information, see the November 3, 1914 entry in MS’ diary and a rough-draft transcript of the November 3-7 entries at Editors’ Notes. For more information on the Virginian’s involvement in the Titanic disaster, see “Allan Liner Virginian Now Speeding Toward the Big Ship,” New York Times, 14 April 1914. For the Empress of Ireland disaster, see the PBS Online page about it.