The Margaret Sanger Award is Planned Parenthood’s highest honor. It is presented annually to someone who demonstrates, “leadership, excellence, and outstanding contributions to the reproductive health and rights movement.”

The award was established 44 years ago in 1966 and was awarded to Dr. Martin Luther King Jr.  in that year.  Dr. Carl G. Hartman,  General William H. Draper Jr.,  and President Lyndon B. Johnson were also honored in the award’s first year. 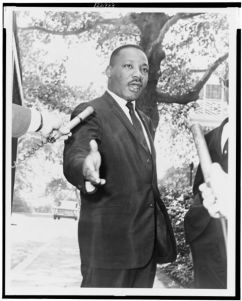 Coretta Scott King delivered her husband’s acceptance speech on May 10th 1966 because he could not attend the ceremony.

“There is no human circumstance more tragic than the persisting existence of a harmful condition for which a remedy is readily available. Family planning, to relate population to world resources, is possible, practical and necessary. Unlike plagues of the dark ages or contemporary diseases we do not yet understand, the modern plague of overpopulation is soluble by means we have discovered and with resources we possess.”

“There is a striking kinship between our movement and Margaret Sanger’s early efforts. She, like we, saw the horrifying conditions of ghetto life. Like we, she knew that all of society is poisoned by cancerous slums. Like we, she was a direct actionist — a nonviolent resister. She was willing to accept scorn and abuse until the truth she saw was revealed to the millions. At the turn of the century she went into the slums and set up a birth control clinic, and for this deed she went to jail because she was violating an unjust law. Yet the years have justified her actions. She launched a movement which is obeying a higher law to preserve human life under humane conditions. Margaret Sanger had to commit what was then called a crime in order to enrich humanity, and today we honor her courage and vision; for without them there would have been no beginning. Our sure beginning in the struggle for equality by nonviolent direct action may not have been so resolute without the tradition established by Margaret Sanger and people like her. “

Dr. Martin Luther King Jr. received his award for, “his courageous resistance to bigotry and his lifelong dedication to the advancement of social justice and human dignity.”

Check out the Planned Parenthood website for more information about other past recipients of the award.