This past Wednesday, the UK government, along with UNFPA and the Bill and Melinda Gates Foundation, hosted a Family Planning Summit in London. According to the Summit website, the “the Summit will call for unprecedented global political commitments and resources that will enable 120 million more women and girls to use contraceptives by 2020. Reaching this goal could result in over 200,000 fewer women and girls dying in pregnancy and childbirth and nearly 3 million fewer infants dying in their first year of life.” No doubt the Summit was particularly welcome in the wake of the Rio +20 United Nations Conference on Sustainable Development, which was regrettably silent on the importance of contraception and family planning to emancipating women around the world. Here are some of the conference’s inspiring messages that we found on Twitter:

Dr Chan: Access to modern contraception is a fundamental right of every woman. goo.gl/YoJiY #FPSummit

“If you take the energy of innovators & use it on behalf of the poor… it can be absolutely transformative.” -@melindagates #FPsummit
— Gates Health (@gateshealth) July 11, 2012

One of the goals of the conference is to “revitalize global commitments to family planning and access to contraceptives as a cost-effective and transformational development priority.” Revitalize is the key word here. Over the past two decades, access to family planning has often been taken for granted as a battle that has been won. In America recently we’ve seen the possible consequences of not fighting for these hard-won gains. In many places around the world family planning resources have never been widely available. It’s inspiring to see activists recommit to making modern contraception available to women around the world! If donors follow through with the promised 2.6 billion, this meeting could really be a turning point for the future of family planning! 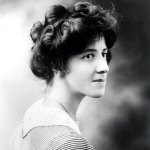 Summits like these were crucial to the emergence of family planning. London also hosted one of the first birth control meetings approximately ninety years ago, which was organized by British birth control activist Marie Stopes. Margaret Sanger, who was visiting London on her way to Germany, was in attendance, although she was not a featured speaker. Coincidentally, we recently came across a 1921 pamphlet that documented the minutes of the conference, which was called the Queen’s Hall Meeting on Constructive Birth Control. Stopes’s conference was one of the many steps that led birth control becoming mainstream, and yet many of the speakers’ messages resonate with the goals of this week’s Family Planning Summit.

One activist, Maude Royden, sent a message of greeting that said

“Every child has a right to be desired before it is conceived, loved before it is born, and provided for while it is helpless. Every mother should have time and health to give the fullest measure of love and care to every child she bears, and to give it without an intolerable strain upon her own vitality. Who will deny these things in theory? Who will not admit that they are so true as to be truisms? And yet the brutal denial of these “truisms” in actual everyday life is seen everywhere, and gives us our terrible infant death-rate, our perhaps still more terrible infant “damage-rate” and a mass of almost inarticulate suffering amongst married women…”

Featured speaker Dr. E Killick Millard implored the audience open up to revolutionary new ideas (ie birth control) that could shape the world for the better:

“Ladies and gentlemen, it is time, high time, that we abandoned old ideas, swept away misapprehension and prejudice; it is high time we abandoned false sentimentality and faced facts as they really are. Now, we know, or we ought to know, that means do exist for preventing concpetion and restraining excessive fertility without the mutilation of marriage or the placing of an intolerable and entirely unnatural strain upon married couples. I submit that the experience of vast number of intelligent and thinking people who have used these mean has demonstrated that they are on the whole effective and harmless. I do not think that we can overestimate the fundamental and far-reaching importance of this great question. This question of birth control really underlies so many other great questions of the day. The whole welfare of humanity may be said without exaggeration to be bound up with it.”

On the one hand, the 2012 London Family Planning Summit called for an internationalist agenda that is fairly cutting edge today. On the other hand, the Summit is part of a long tradition of birth control reformers coming together in order to realize an ideal of women’s emancipation that is still out of reach.