Margaret Sanger,  who would have been 136 years old today, would no doubt be shocked to learn we are still fighting the battle for

reproductive rights, or that she has become a pawn in this endless battle. As Imani Gandy point out in her recent, excellent Reality Check article (http://rhrealitycheck.org/article/2015/08/20/false-narratives-margaret-sanger-used-shame-black-women/) notes that as “anti-choice fanatics seem utterly incapable of making an honest argument that Black women should be forced into childbirth rather than permitted to make their own decisions about what to do with their bodies, they resort to lies, misinformation, and half-truths about Sanger and the organization she founded.”

Yet we could not have come even this far without the dedication, spirit and the willingness of Margaret Sanger to dedicate her life to make certain that all women would have access to effective and readily available contraceptive knowledge and tools. She knew the extent of the struggle and understood that success would be achieved quickly or easily. But she was guided by determination. “We must unite in the task of creating an instrument of steel, strong but supple,” she wrote, “if we are to triumph finally in the war for human emancipation.” (Pivot of Civilization, 1922).

Margaret Sanger’s 131st birthday occurred just a few weeks ago, on September 14,  although if she were still alive to speak for herself she’d claim it was only her 127th birthday.  Sanger often lied about her age, shaving off four to five years.  She even went so far as to write a new birth year into the family bible, replacing 1879 with 1884.

“I refuse to have my age in print if I can help it. Like Edna Ferber who says she does not want the mantle of middle age thrust upon her shoulders, I refuse to have the courtesy of people my own age get up to give me a seat!!!! This never happened until an evening paper on Sept 14 gave out a piece that MS was entering her 70th year; I was not here to protest but when I arrived I felt an atmosphere of respect & regard for the feeble, indigent & aged! Well when one settles down to [growing] old its all OK to talk age – but when in a competitive era with youth – age had best be kept under the bushel.” (The Selected Papers of Margaret Sanger Volume 3, Page 352)

The article Sanger refers to in this quote cited her birth year as 1883 and referred to her as 70 years old, Sanger was really 74 that year. Sanger took her false age all the way to her grave: her tombstone has the incorrect birth year chiseled into it. 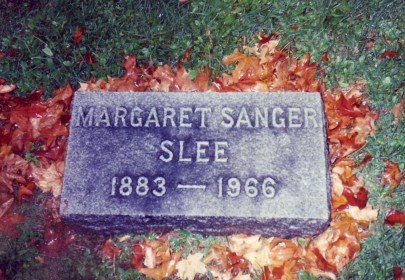