In the year 1758, King Louis XV commissioned prominent French architect Ange-Jaques Gabriel to build two palaces in France, designed for government use.  Just off the Champs Elysees in Paris, these identical buildings stand tall today, one as a French Naval base and the other as the world-famous Hotel de Crillon.  Less than two centuries after its conception, Margaret Sanger laid her head here on two separate occasions. 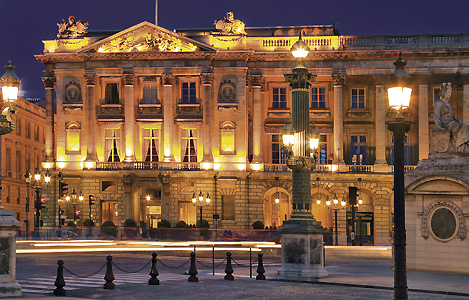 Sanger’s first stay at the hotel occurred between July 16 through July 21, 1927.  She wrote to Edith How-Martyn on the hotel’s stationary saying, “Mrs. Hodson and I have had a good day together but I miss you terribly.”  Sanger had come to Europe to complete the last minute details and attend the World Population Conference, that would be held in Geneva at the end of August.  This conference was one of the earliest to deal with the population question internationally.

Thirty years later, Sanger returned from October 22 through October 24, 1957.  She was on her way to Berlin, this time, to attend the Governing Body meeting of the International Planned Parenthood Federation.  Sanger was president of the IPPF from its founding in 1952 until 1959, when she retired from active work.

Sanger is in good company as a guest of The Hotel de Crillon.  Theodore Roosevelt, Andrew Carnegie and King George of Britain all spent the night at the luxury hotel, and years later Elizabeth Taylor and Cary Grant visited multiple times.  More recently, celebrities such as Madonna and Mariah Carey have been listed as visitors.  When Lance Armstrong spent the night after his Tour de France victory, they flew the Texas State Flag.

The Hotel de Crillon has a royal history that remained relevant during Sanger’s visits and still remains relevant today.

Margaret Sanger traveled the world on her quest for birth control and she stayed at a number of interesting places. This series highlights some of them.

The Astor Hotel in Shanghai

April 25-May 5, 1922: Margaret Sanger traveled to China in April-May 1922, stopping in Shanghai for a week. She stayed at the historic Astor House Hotel, the first Western hotel property in the country. Originally named after its owner– “Richard’s Hotel and Restaurant”– when established in 1846, the hotel was renamed in 1857 with its move across town. Many Chinese “firsts” have occurred at the Astor House Hotel, including the first use of electric lamps (1882), the first phone call made (1901), China’s first prom (1897), and the first stock exchange after 1949 (1990). No wonder Sanger chose to stay at such a historic place!

Moreover, Sanger was far from the first famous guest to sleep at the Astor House. World-renowned figures like Ulysses S. Grant, Albert Einstein, Bertrand Russell, and Charlie Chaplin also opted to stay the modern yet historic hotel in Shanghai. Sanger had a number of meetings with journalists while at Shanghai, noting:

“The commercial Press of Shanghai was most generous in its propaganda. For one whole week they brought out scientific articles. The translated practically everything they could put their hands on. For one whole week while I was in Shanghai, the Chinese Press was aflame with the subject of Birth Control.” (Sanger, “Public Meeting,” Proceedings of the Fifth International Neo-Malthusian and Birth Control Conference [London, 1922], 206)

The highlight of Sanger’s trip to Shanghai was her April 30 speech on birth control at the Labor Museum. Sanger addressed the third anniversary meeting of the Family Reform Association, a group of about 800 people. Things went well until Sanger got to some of the more practical parts of her talk, when her interpreter, a young woman, became overcome with embarrassment by the frankness of Sanger’s topic.  She faltered and then suggested that a male doctor there complete the interpreting. MS suggested that she hand out pamphlets and give an extra supply to the Family Reformation Association to give to their members; and she was thanked elaborately by the Chairman. (New York Times, June 10, 1922.)

Margaret Sanger traveled the world on her quest for birth control and she stayed at a number of interesting places. This series highlights some of them.

One of the buildings at Gandhi’s ashram.

December 2-5, 1935.  Margaret Sanger traveled to India in November 1935, embarking on a nine-week tour of the country that totaled over 10,000 miles of travel.  One of the most important stops on her tour was her stay at Mohandas Gandhi’s ashram in Wardha. Today a city of about 1 million, Wardha had no hotels nearby in 1935. Instead, Gandhi insisted that Sanger stay with him: “Do, by all means come, whenever you can and you shall stay with me, if you would not mind what must appear to you to be our extreme simplicity.” [LCM 135:345] That simplicity, Gandhi’s secretary later told Sanger, would include “no master and no servant,” and “every one doing some or other kind of physical labour.” [LCM 135:406]

Sanger had no trouble with such modesty.  She slept under the stars, and described the guest house in her diary as:

a four partitioned house rough hewn white plastered walls half way to the roof, the upper half open for air. Small bamboo poles run cross wise in the roof & larger poles crossing & supporting the roof– Its all spotless & clean–rough stone floors two matressless cots, (our own bedding will do) one pole in the center has a circular wood shelf which serves as a table for us both or chairs. Its all very simple but clean & peaceful the bath room a large stone floor room in the same building but not adjoining, one has to go outside & around to get to it two commodes & two large pails of water hauled by men on the place from a large circular well seen from my door & window. (Wardha Diary, LCM 1:209.) 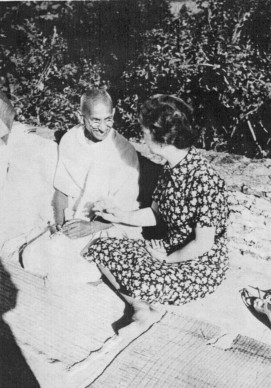 She described meeting Gandhi in her diary.

We went directly to his place & met him, tho this is his day of silence. He rose to greet me smiling from ear to ear. I put down my bag & gloves & flowers & magazines in order to take both his hands. He has an inward light that shines in his face! that shines thru the flesh! that circles around his head & neck like a mist, with white Sails of a ship coming thru. It lasted only a few seconds but it is there. When I looked again it was only the shiney appearance of his flesh that I saw, but always the smile & a hospitable welcome. (Wardha Diary, LCM 1:209.)

On December 3, she and Gandhi discussed birth control, population, and the status of women in India. Although Gandhi ultimately refused to endorse the use of contraception to control population growth, Sanger was deeply grateful for his hospitality and time: “Needless to say,” she wrote, “these three days were not ever to be forgotten or parallel in human experience.” (“The Humanity of Family Planning,” Third International Conference on Planned Parenthood, Report on Proceedings (Nov 26, 1952), 12, 54-55. [MSM S72:0776].)