From pills, to implants, to patches, Sanger would be awestruck at the variety of birth control methods available to women today. Many women are now able to choose the birth control method that best fits their needs and lifestyles. For Sanger, who believed that “no woman can call herself free who does not control her own body,” this would have been a huge feat, despite the drawbacks of these methods. Birth control can be expensive and comes with an array of side effects, ranging from mood swings to heart attacks. In fact, for many women today, there is still a great deal to be done in terms of access to safe and effective birth control.

One avenue that has been largely unexplored until recent years is male birth control. Early advocates of birth control, including Sanger, were not very enthusiastic about male-controlled methods, which at the time, included condoms and withdrawal. Sanger felt that these methods “placed the burden of responsibility solely upon the husband – a burden which he seldom assumed.” Instead, the women who came to her were seeking “self-protection she could herself use, and there was none.” In other words, women did not feel comfortable trusting their husbands with birth control, and sought a way in which they could, in a sense, arm themselves from unwanted pregnancies. Thus, the emphasis of female birth control methods has its roots in the early years of the birth control movement. Female-controlled methods such as diaphragms became popularized by the birth control movement because they gave women agency in their reproductive lives. 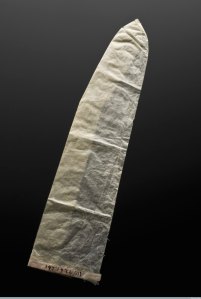 A condom made out of caecal, or animal gut membrane, c. 1910. (Courtesy of the Science Museum, London)

Additionally, there is reason to believe that Sanger’s focus on female-controlled methods was a strategic move on her part. Women who relied on condoms for birth control did not need to visit birth control clinics. Sanger would have seen this as an immeasurable loss, because birth control clinics were often the only way women became adequately educated on their health and sexuality. The need for clinics also helped legitimize birth control as a public concern that was deserving of acceptance and state-sponsored support.

However, now that is has been over a century since Sanger’s first publication of “Family Limitation,” the issues women face when it comes to reproductive rights have evolved. Enter male birth control. Specifically, Vasalgel. According to the Parsemus Foundation‘s website, Vasalgel is a “long-acting, non-hormonal contraceptive similar to vasectomy but with one significant advantage: it is likely to be more reversible.” It involves injecting a gel into the vas deferens in order to stop the flow of sperm. Vasalgel can be flushed out through a second injection if one wishes to restore their sperm flow. Although it could be a while until Vasalgel passes clinical trials and makes it way on to the market, the public’s increasing interest in this type of birth control shows us that we have come a long way since the start of the birth control movement.

Image courtesy of the Parsemus Foundation

The possibility of safe, effective, and long-term male contraception reveals a cultural shift in the way that we see birth control. It is no longer solely the woman’s burden to prevent unwanted pregnancies. Vasalgel shows us that men are starting to be held accountable as well. Although Sanger was against male-controlled contraceptives in the early years of the birth control movement, one could argue that products such as Vasalgel and what they tell us about how far we have come in terms of reproductive rights would certainly impress her.

For more information on Sanger’s stance on male birth control, check out these sources:

2 thoughts on “Sanger and the Ever Elusive Male Birth Control”