On Monday June 25, the Library of Congress opened an exhibit in Washington on “Books That Shaped America”. The exhibit celebrates 88 works that shaped American life and thought, including Margaret Sanger’s 1914 pamphlet “Family Limitation”, which was a basic instructional manual of 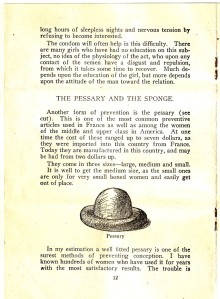 Margaret Sanger, “Family Limitation” (1914): While working as a nurse in the New York slums, Margaret Sanger witnessed the plight of poor women suffering from frequent pregnancies and self-induced abortion. Believing that these women had the right to control their reproductive health, Sanger published this pamphlet that simply explained how to prevent pregnancy. Distribution through the mails was blocked by enforcement of the Comstock Law, which banned mailing of materials judged to be obscene. However, several hundred thousand copies were distributed through the first family-planning and birth control clinic Sanger established in Brooklyn in 1916 and by networks of active women at rallies and political meetings.

In light of the current national conversation on whether or not women can “have it all”, it seems important to remember that less than 100 years ago women were widely viewed as baby-making machines. Sanger’s efforts to educate women to be more than that were punishable by law! Although the current debates about work-family balance point to how far we have to go for real gender equality, we should also be mindful of how far we have come. Sanger was already thinking about these issues these issues in the introduction of Family Planning:

“Of course, it is troublesome to get up to douche, it is also a nuisance to have to trouble about the date of the menstrual period. It seems inartistic and sordid to insert a pessary or a suppository in anticipation of the sexual act. But it is far more sordid to find yourself several years later burdened down with half a dozen unwanted children, helpless, starved, shoddily clothed, dragging at your skirt, yourself a dragged out shadow of the woman you once were.”

Read more about “Family Limitation” in this blog post, or read the pamphlet yourself here!

5 thoughts on ““Family Limitation”: A Book That Shaped America”